My first memory of listening to something other than music on the radio is of listening to NPR in the kitchen of my college boyfriend’s house. His mother was putting a kettle on the stove for tea, the snow was falling slowly outside, and Terry Gross held me captive with “Fresh Air.” Up until then, the only story telling I’d heard on the radio was entertainment gossip. But THIS! This was amazing.

Honestly, I felt instantly smarter. Maybe that’s just from listening to NPR, which up until then I thought was only for old cranks sitting at home complaining about the world. But here was this voice, soothing and rich, talking (about what, I can’t remember) and making me think about how I fit into the world. The WORLD, people. Being young (at the time), it was easy to feel like I could change the WORLD!!

Twenty years later, I have not changed the world, but I’ve changed many, many diapers. Life happens, amiright? My soapbox idealism was replaced by parenting. Then, surviving parenting. Then, having another child, parenting her and her sister, and maintaining a bond with my spouse while still feeling like I had some humanity left in me. How, when most of my listening time was filled with Baby Shark and Taylor Swift, was I going to keep up with the Great Big World?

Turns out, the answer is podcasts. (I know, I know, you’re likely WAY more hip than I and have been listening to podcasts since the beginning. My hipster cred comes from listening to music on a reel-to-reel eight-track player, vinyl, cassettes, and CDs way before MP3s were destroying homemade PCs through Limewire. Cut me some slack!) Podcasts have become the easiest way for me to know what the cool kids are doing and saying, what is happening in the world, and a way for me to guffaw and cry alone without bystanders.

My subscriptions are vast into the rabbit hole of podcasts, ranging from lost history, politics, birth, and comedy. Some are well known, some are obscure. Each one helps me feel connected to the greater world out there. Here’s a short list right off my phone of the last five podcasts I listened to (that I think you need to listen to, too!):

You know when you meet someone at a party and you end up talking with them all night and actually get to hang out with them later and laugh about life? Me, neither—most of my conversations happen over Facebook Messenger because we’re all too busy balancing our Mental Load. But, Jessica Williams and Phoebe Robinson are definitely two people I would love to meet at a party and talk with all night. When I heard the initial promo for this show, I was hooked. We all need a laugh, right? Well, Phoebe  and Jessica dish out about sex, romance, race, hair journeys, living in New York, and Bono. They also have guest comedians performing sets that have me snorting with laughter as I drive all over San Antonio picking up and dropping off placentas. This particular episode addresses a question I, too, have had recently: “What do you mean Creed put out six albums?” Also, follow them on Instagram; you won’t be disappointed. #YQY

Bricia and Paulina Lopez are another set of Awesome Ladies I Want To Hang With. They share stories that also make me laugh and cry, and not just because they create a space to learn and share about motherhood, but also because they are Latinas. Originally from Oaxaca, listening to the Super Mamás gives me a sense of connection to my culture as they talk about their own experiences as women and mothers who are Latinas. (They also have various businesses and host amazing events in LA.) You don’t have to have a shared background to appreciate the podcast, though. Topics have covered everything from birth to loss and so much more in between. This episode came at a great time for me as I’m also building my business and stressing about my kid starting school. Ayyy! Not sure I’m brave enough yet for homeschooling, but I love hearing others’ journeys.

3. This American Life: Fear and Loathing in Homer and Rockville

Ira Glass, folks. I don’t think I need to say more about him or TAL. Mesmerizing, just like Terry Gross. (#nerd)

Who isn’t a sucker for a love story? I know I give off the air of Tough Lady, but I have a soft, caramel center that has potential to be ooey gooey with the right love story that doesn’t involve a Fabio-esque lead and a ripped bodice. Modern Love touches all aspects of love, and sometimes I find myself bawling and laughing at a red-light or right before picking my kids up from school. Fabulous personalities read the essays, and the author is interviewed at the end. Debra Winger read the essay, “Marry My Husband,” and I was a goner. These glimpses of others’ experiences in the race of humanity remind me that though we are all our own people, we are a part of something bigger.

I have gone back to the beginning to listen to every one of these episodes. Why? Because all the weird stuff about motherhood and parenting is normalized through these episodes. Step-parenting, mashed-up cultures, pregnancy, and ALL THE THINGS surrounding it: special needs, families, sex, family drama—you know, life. It’s beautiful, absurd, messy, funny, hard, and more, and the stories shared are so moving. Plus, they list some pretty fantastic resources on their site (which also are referenced in the show). And you don’t need to be a parent to listen.

This was one of the first podcasts I heard, ever. This series is not for everyone, but it is pretty amazing. There’s no lesson here, just stories told in complicated ways that are intense, strange, full of feels.

“The Living Room” episode is wonderful, though it seems odd at first. Trust me and listen. You will need tissues.

What’s on your podcast playlist? Share your recommendations in the comments! 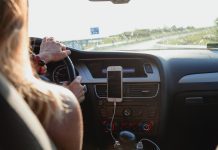 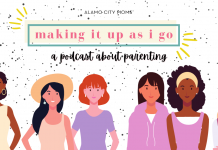 Making it Up As I Go: Ugly Crying, Being Kind, Saying Thank You and Soft Surroundings

Making It Up As I Go: Summer Travel with Kids