I could lie and say I was at the end of my rope, but really it was just a normal Tuesday. A few errands, a late lunch, a Target run for throw pillows—you know, just a Tuesday. But I’ll tell you what: it worked. It worked like an ever-lovin’ charm. Throw your kid’s toy out the window and you’ll gain the horrified shock silence you’ve always wanted from your children.

Here’s how it all went down.

We were running in, store to store, because I needed to find some throw pillows for fall (because duh—it’s August). I don’t even need to explain the urge to enter the doors of Target, though, because that’s a force stronger than you and me. So, there we were in Target, when my daughter announced she needed to go to the Dollar Spot section because she brought $5 to spend, and like mother, like daughter, that money was burning a hole. So, off we went (after two hours of errands already) to search the Dollar Spot for must-haves. My two sons were pretty much out of gas and patience, and it was beginning to show. We searched and searched and my daughter finally found the slime and precious Kinder Joy egg that she’d been waiting for her entire life [insert mom eye roll here], and we were headed home. For those of you who aren’t as cool as a six-year-old, these eggs are made of chocolate and have a little plastic toy in them. I don’t get it, but to my daughter, they might as well be made of gold. 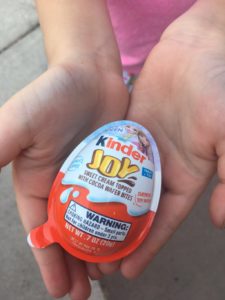 So, we walked out of the store and up the long sidewalk toward our car, which was conveniently parked seven stores away because I’m not right in the head and thought it would be fun to walk store-to-store. Riiight, not so fun anymore.

So we’re walking. My middle son starts taunting my daughter with a race. She isn’t interested, yet he keeps on…and on. She snaps back, “The only reason you’re winning the race is because you’re the only one racing. I’d win if I wanted to.”

“ENOUGH,” I plead. “No racing. No fighting. Just walking.”

I decide silence is the winning ticket here and proceed to push the stroller through the Texas heat in silence so that I don’t lose my you-know-what outside of HomeGoods. Those are my people, and I can’t have that kind of reputation there. So silence it is.

Out of the corner of my eye, I witness it. She trips him, and he’s down. Wait for it—three, two, one—”WAHHHHHHHH!”

My son runs over and tattles. I calmly ask my daughter what happened (obviously an old mom trick because I already know the answer). “I pushed him. Oh, wait—actually, he pushed me.” Strike one.

“OK, OK. I think I might have tripped him on accident because he was running so fast by me.”

“Nope. Strike two, my friend. And now you’ve lied twice and will have consequences at home. No more talking until then.” (If you recall, I’m still in public and still walking toward my car and now coincidentally, in front of a liquor store.)

This is where the story goes further south than Mexico. She loses it. And by loses it, I mean put a fork in her. She starts screaming, “You don’t care about the truth? You don’t even care about me trying to be honest? I should get three strikes! Three strikes is the correct number of strikes!” And so on and so forth. People are looking, y’all. We all know those looks and side-eye glances. I got at least three in that moment alone.

So I keep walking. Almost there. She’s crying and still talking. One child is whimpering and another is blowing raspberries from the stroller. Keep walking.

We get to the car. It’s hot, I’m sweaty, and I’m so over Tuesday. My daughter is still crying and telling me it’s important to care about the truth and if I’d just let her tell me what happened, she wouldn’t be mad at me anymore. I’m wondering what bottle of wine I should drink tonight: red or white? Red feels more satisfying on a day like today. A nice Cabernet should be fantastic.

I buckle the boys into their car seats and get into the car. I look back at her and calmly as I can say, “One more word and your Kinder Joy egg goes out the window.”

Welp. Not my best work. As soon as I said it, I knew I shouldn’t have. You’re not supposed to threaten things you won’t follow through on. I know that. I’ll admit, perhaps it wasn’t my most shining moment as a parent. However, something happened in the car on that Tuesday that I can’t explain. I forgot the tools I have spent years collecting and instead decided to sink to the lowest level I could think of and threaten my child with a Kinder Joy egg. I had gone and done it.

I look back in the mirror, and she stops for a second. Then she looks at me, thinks about my command to remain silent, and says, “Like this?”

BAM. The window rolls down and the egg goes flying out. One fluid motion.

She loses it. My son loses it. And I realize that I, a grown woman, have indeed thrown a fully packaged Kinder Joy egg out the window.

Immediately she and I have the same thought: I just littered and could have hit a car in the process. SOLID parenting, y’all. She informs me that I’ve just littered and I decide to take the fifth. To make matters worse? I turn around and scream, “Do you believe me now?!” I should not be driving. I’m a lunatic. Turns out that she does, in fact, believe me now because she is silent all the way home. And as if this situation isn’t crazy enough, I look down at the radio and this is what is playing. The air smells of cheap victory and take a picture to document the moment I lost all parental dignity. 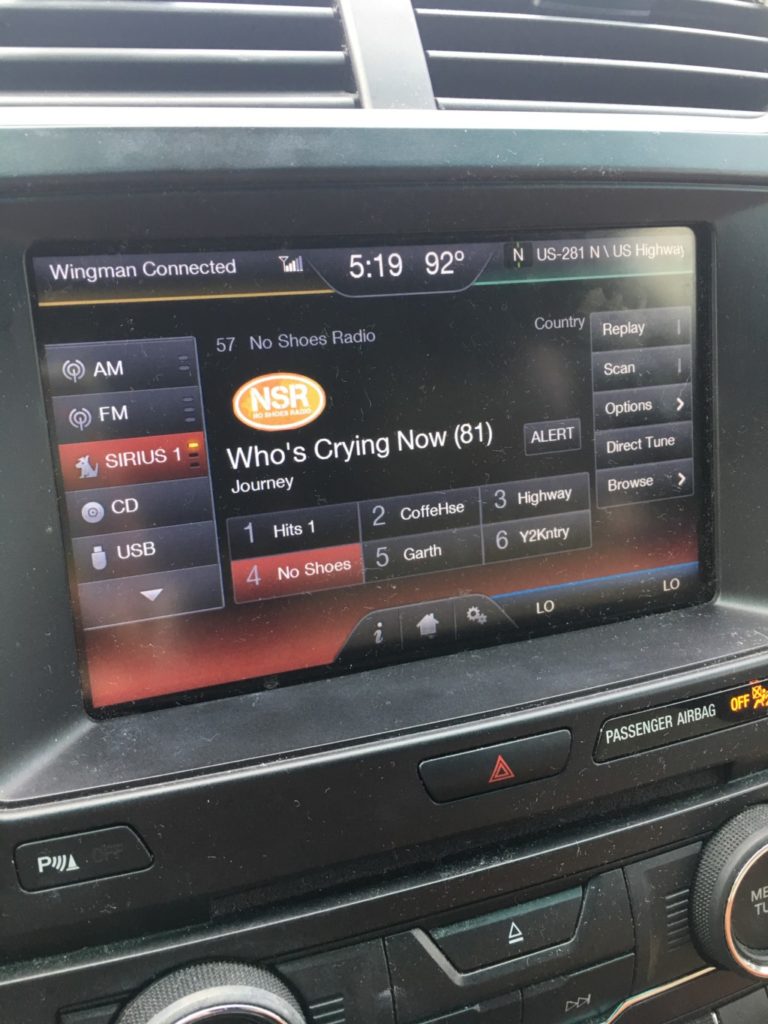 Adulting update: The next morning, I decided to turn back into an adult. I did give myself some props for following through with my threat, but I went up to my daughter’s room and apologized. I said that I wasn’t sorry for refusing to let her have the egg after the lying, outburst, and disrespect she had shown, but that I should not have thrown it away (or, ahem, out the window) because she paid for it with her own money. I said that I was wrong, out of line, and sorry. I promised to replace her Kinder Joy egg, but she still had to earn it back with better behavior before receiving it. She agreed to the terms, and we hugged it out. I turned to leave her room and she stopped me. She said, “Mom, I’m sorry for not telling you the truth, but you really shouldn’t litter anymore. You’re an adult, remember?”

And there it was: the nail in the coffin. Thanks, kid. I do remember. Well, at least I do now.