My husband likes to tell a story of when he was a child and his mom bought him lady shoes.

Just like my four boys, as a kid he spent most days outside, tearing it up in the streets: riding bikes, climbing trees, and getting into all sorts of trouble. Being an active, rough-and-tumble kid, he needed some new sneakers, and his family didn’t have much money.

My mother-in-law saw a pair of red shoes on a clearance rack in his size, bought them, and gave them to him. He wore them to school, and other kids immediately made fun of him, because it turns out the shoes were actually women’s shoes. At eight years old, he was embarrassed and angry enough to hold onto that moment and still bring it up today.

Is this the kind of majorly awkward moment from childhood that haunts you through adolescence? Absolutely.

Should it still haunt you once you’re in your late thirties, to the point that you remind your mother about it from time to time? Probably not.

Whenever he brings up “Shoegate” of 1988, my mother-in-law responds by throwing her hands up in the air and uttering her best tried-and-true line, “Turn the page.”

It’s the simplest of statements that holds so much meaning in so many ways.

Turn the page on past hurts, old grudges, and even lady shoes.

Turn the page on a nasty comment someone may have given, or on an embarrassing moment that happened. Turn the page on past mistakes because each day is a new piece of paper to write your story.

Maybe you drank too much at a friend’s wedding and had to make a quick exit stage left because you turned into Muhammad Ali in heels and tried to fight a groomsman (and then later realized it wasn’t really a groomsman after all, but a flower arrangement that you thought gave you a dirty look).

You’ll now go down in wedding photography history as a welterweight champion, and anyone who truly knows you won’t judge—a least not that hard.

In my motherhood journey, turning the page is a huge part of survival and helps me not dwell on things that in the big picture of life, aren’t important.

For example, maybe you’ve eaten super clean for a day or two and have hit the gym three days in a row. You’re feeling pretty amazing, like maybe you should start an Instagram account called “@FitnessMama.” But then you take your kids to Red Robin for dinner and end up polishing off a bottomless basket of fries with Ranch dressing and a kiddie sundae. (speaking from personal experience here). It’s all good! It was a delicious, glutenous page, and tomorrow you can write all about juicing and paleo meals!

When you look at your life as a book, and you’re the author, how are you supposed to get to the good chapters when you’re stuck on the ones you’ve already read?

You may dread running into a former friend at the grocery store or avoid a certain PTA member like the plague. That’s OK.

Turn the page and know it’s OK to run into people with a smile and continue on. It’s called adulting—we all do it. Turn the page and keep moving forward because the chapters that follow will likely bring some new characters into your life and they’ll probably be pretty great.

One day, when you’re old and gray, do you want your book to tell the story of someone who loved and focused on what’s important, or someone who got stuck on chapters from the past and couldn’t keep writing? You’re the one with the pen and the paper, so make your adventure one that brings the most joy. 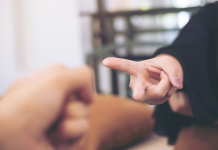 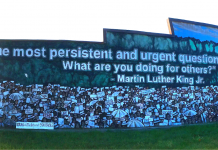 You Can Support the Black & African American Community Through Local Causes

You Can Support the Black & African American Community Through Local...