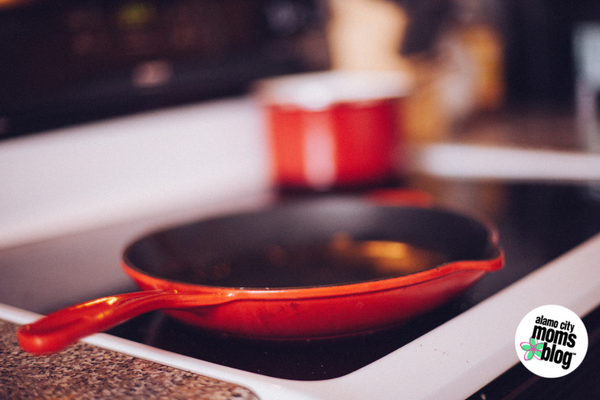 Meal prepping and child juggling in tandem is never easy, and I learned that the hard way when I was on solo parenting duty and trying to prep dinner and entertain a two-year-old at the same time. My usual modus operandi is to get her at the table with a veggie “appetizer,” a small helping of peas or carrot sticks, something that gets some of the good nutritious stuff into her tummy while she’s hungry enough to eat whatever is in front of her. This time, however, I thought I could whip up a quick meal and then sit down to eat and chat together.

Just one second is all it takes, the saying goes. As I turned around to grab something from the fridge, my inquisitive two-year-old reached up a single finger to touch the red ring around the saucepan where the food was cooking. In just a split second, she went from curious to shocked to wailing.

Watching her initial shock, seeing her cry, watching her rub her hand the rest of the night, trying to get a Band-Aid and some Neosporin on the burn—all of those little incidents made me feel like I was in the running for the Worst Mom Ever awards: Kitchen Edition. As the week went on and the burn bubbled up into a small blister, I felt guilty anew each time I had to tell her to stop touching it or every time I glanced at her tiny, otherwise perfect hand.

However, no matter how bad I felt, the truth was, she learned the lesson irrevocably more than she ever would have from hearing me repeat myself ad nauseum about not touching the hot stove. I would have gladly turned back time to stop her from reaching out that one little finger to the red-hot burner, but since I couldn’t, the best thing I could do was to be there for her after it occurred, talk to her about what happened, patch it up, and give her an ice pack (more of which ended up in her mouth than on her finger, but whatever. You do what you can!).

Two weeks after this incident, she and I were working together to mix up some cookies in our kitchen, when my daughter looked at me seriously and told me, “I’m not going to let my baby sister touch the stove.” Baby sister (who, at that time, was weeks away from her arrival) is a big topic of conversation: what she will and won’t be allowed to do, where she’ll play, what she’ll like, etc. The burn stuck with my older daughter enough that she was already thinking about how to protect her then-unborn sister from experiencing the same hurt she had, even though it was weeks after the incident.

As she grows older, there will probably be plenty of hot stove moments: when she’s pressured or teased by other kids; when she gets left out of a party; when she gets a cell phone; when she wants to start dating; when she starts driving; when she doesn’t make the team or get the A or earn the MVP award. I’m going to want to be there to protect not only her physical body, but her sweet, loving little heart from every cut, scrape, or bruise that she might encounter along the way. However, I can’t always be there. I won’t be able to protect her from every wound she might encounter, particularly the emotional ones. However, what I can do is make sure that she knows where to come when these incidents occur. I can make sure she remembers that she has loving parents she can come to to be patched up, listened to, or hugged. My job as a parent isn’t to say, “I told you not to touch that stove,” or, “See, that didn’t feel so great, did it?” My job is to be there for her, to make sure that an accident or incident isn’t greeted with “Here’s where you went wrong,” but instead with “I understand and I’ll help you do right next time.” She’s already learned the lesson by enduring the pain. My job is to make sure she’s ready and prepared for next time, to build her strength and resiliency so that, when the hurts and stakes are bigger, she comes out of them with new perspective, knowledge, and eventually, wisdom.