At a recent doctor’s appointment, we sat playing with dinosaurs in the exam room while waiting to be seen. The doctor walked in on a passionate discussion over who would emerge victorious in the battle we were about to wage between the Carnotaurus and the Dimetrodon in the toy bin. After listening to a bit of the conversation, she commented on how lucky my son was to have a mom who knows her dinosaurs. 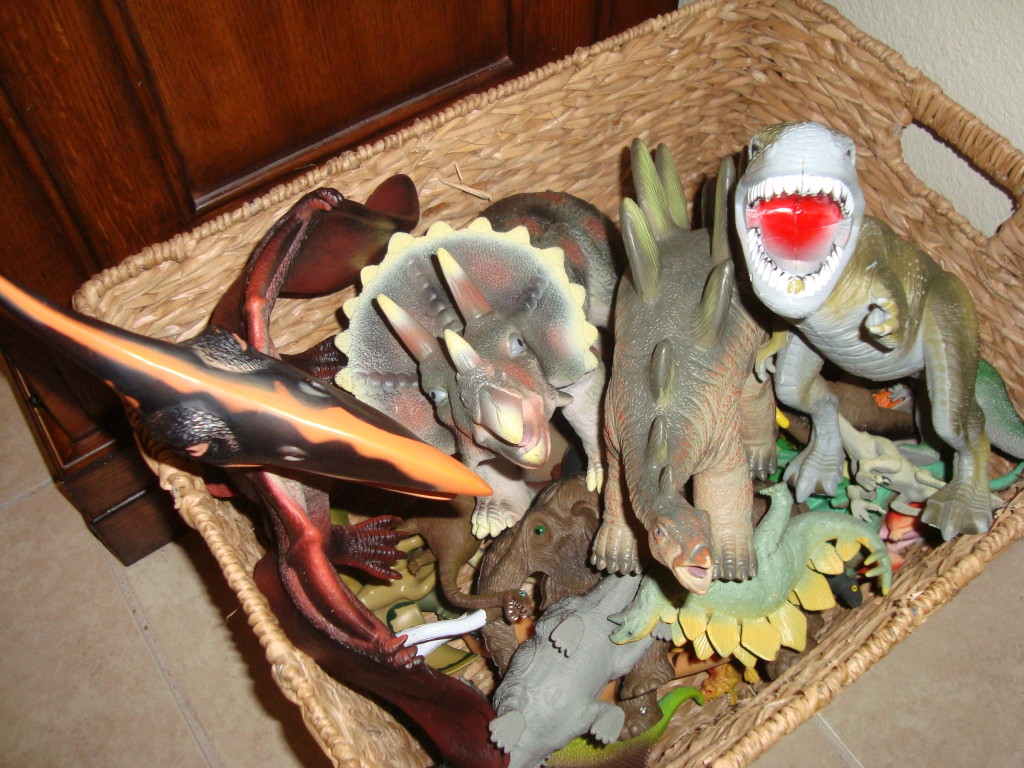 “Wow—not many moms know that stuff. Were you always into dinosaurs?”

I almost snorted. After living in and shopping my way across Europe, I can identify hand-cut, leaded crystal at 20 feet, down to the manufacturer and retail price versus what it goes for at a warehouse sale. But dinosaurs? No way.

I can name random ’80s pop culture and trivia, list fabulous places you should visit, and walk you through the varieties of antique stained glass windows. After working for an automotive manufacturer (fancy term for a car company), I can identify vehicles by make, model, and manufacturer faster than your mechanic. I’m also known for my command of useless knowledge about the State Fair of Texas. But dinos? I grew up on Barbies, and I don’t remember Mattel offering a Jurassic or Cretaceous Barbie.

So how did I become an armchair paleontologist? Dinosaur knowledge saves my sanity and impresses my Little. You see, I get peppered with nonstop questions and discussions of dino lore and legend. Quiz me—there’s no way you can throw something at me that my four-year-old hasn’t. Want to know what their names mean? Curious about what they ate or how big they really were? Want to know where they lived, if there were dinosaurs in Texas, who their friends were, or how far away we live from the Great Dinosaur Valley? (Note: that last one is a trick question. We just finished The Land Before Time movies, and the Great Dinosaur Valley features prominently in all 13 films. That’s not a typo—there are 13 movies in the series. I was too old—and note, not into dinosaurs—when the movies came out, so you could say I’ve been catching up. Or you could admit that I’ve been living in a circle of hell not mentioned in Dante’s Inferno. Dinosaurs breaking into random song should be outlawed—no one wants to risk another Barney. By the way, I know there was also a The Land Before Time television series. But my Little doesn’t. And if you tell him, I will cut you deep and wide.)

What have I used as study guides on my knowledge quest? Name a dinosaur book, and it’s probably on Little’s bookshelf. We have dinosaur puppets, toys, Lego sets, posters, games, t-shirts, underwear…it has no end. Most obsessions don’t.

Of course, it’s not just dinosaurs. Little also has a deep connection with sea life. Well, it started with sea life, but that was just a gateway to sharks. All things shark. Insert the dino paraphernalia list here: books, stuffed animals, toys, Lego sets, posters, games, t-shirts…we don’t have shark underwear, but we do have a shark hat, bathing suit, and socks. Before you ask, yes, I can tell you which shark swims the fastest, which types eats what, where they live, and how big they can get. I also know all of the ancient sharks. That’s right: there are dino/shark crossovers. MIND. BLOWN. There were sharks that lived in dinosaur times. Who knew, right?! (And yes, we have those toys and books, too.)

Based on the amount of dinosaur and shark attire and décor aimed at the toddler/little set, I know I’m not alone. There’s no doubt that kids can grab onto something with the tenacity of, well, a shark on a surfer, and there’s no shaking them from it.

And I haven’t even touched on the world of Disney, Frozen, or Lightning McQueen. By the way, my condolences on the Frozen front—it’s the one obsession we skipped—but Lightning McQueen? That’s another story. Let’s just say the floor of my den has more Cars vehicles than your typical used car lot, and yes, we have books, clothing, sheets, backpacks, and more adorned with Lighting McQueen. And I know all of the Cars characters: which ones are good at fighting dinosaurs or can drive into the water and help the sharks find food or help the baby dinosaur find his mama when he gets lost. 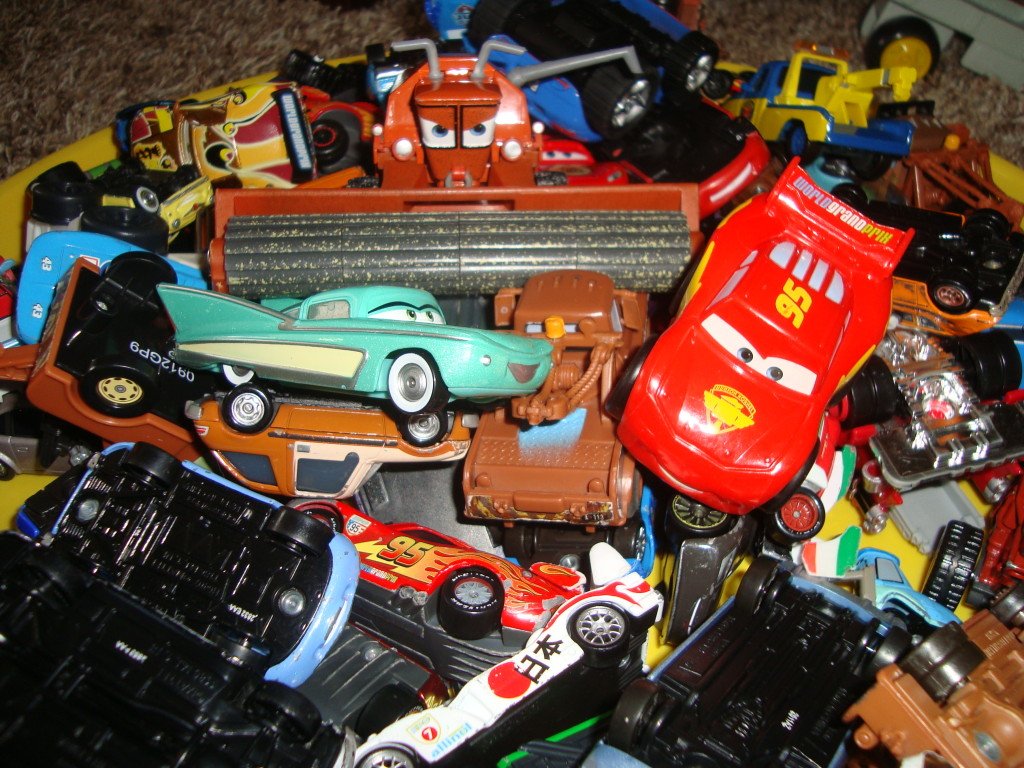 OK, so maybe there’s no scientific evidence of that, but this mama has a good imagination, and mamas know that every once in a while, you just go with it. I never expected to become a dinosaur/shark/Cars expert, but that’s what Little expects, so that’s what I do. I learn about whatever he’s into, and I engage with him. We talk dinos; we play sharks; and I can’t tell you how many dino/shark/Cars battles/games/debates we’ve had.

These three obsessions have stood the test of time for Little, which in the life of a four-year-old, is surprising. Many interests come and go (sorry, Thomas the Tank Engine—we’re just not that into you), but for my Little, this trifecta has been going strong for almost three years. We indulge it, getting a little contact high when we find a cool new dino book to add to the collection.

You see, while sharks aren’t my thing, they’re a way I can connect with Little, and as the days fly by and he grows up way too fast, I crave that connection. I can’t carry him as far as I once could (though lifting 43 pounds of energetic boy is a great workout!), but I can snuggle on the sofa and debate dinos or plot battles with the best of them.

Whatever it is that your little one loves, embrace it—be it sharks, construction trucks, trains, dinos, planes, pirates, fish, Legos, or fill-in-the-blank/the-latest-addiction-from-the-manipulative-minds-at-Disney. I’m a boy mom, so I’m afraid I don’t know the full list of obsessions for girls, but I do know girls who love any number of the topics I just mentioned, and thank goodness, today’s world doesn’t care. Pink and frilly or large and scaly, let your girl love what she loves. No matter how mind-numbing it may be, it’ll make you the coolest mom ever. Hearing “thanks, Mom, you da best” melts every mom’s heart. (And yes, that’s how my Little says it right now, and I know it’ll hurt my heart when he’s old enough to correctly pronounce “the”.)

I hope the connections we’ve made over Cretoxyrhina, Carnotaurus, and Mater carry us through the more difficult times when making connections won’t be so easy. I want my Little to know in his heart that Mom cares about whatever he cares about—dinosaur poop, shark teeth, and all—and that no matter what, I’m here for him.

So jump in with both feet and become obsessed with your child’s obsessions. Your Little will love it and you might learn something along the way. Who knows? You might score a spot on Jeopardy and sweep the dinosaur category or simply impress a doctor with your mad mama skills. Just don’t invite me over to binge-watch The Land Before Time. 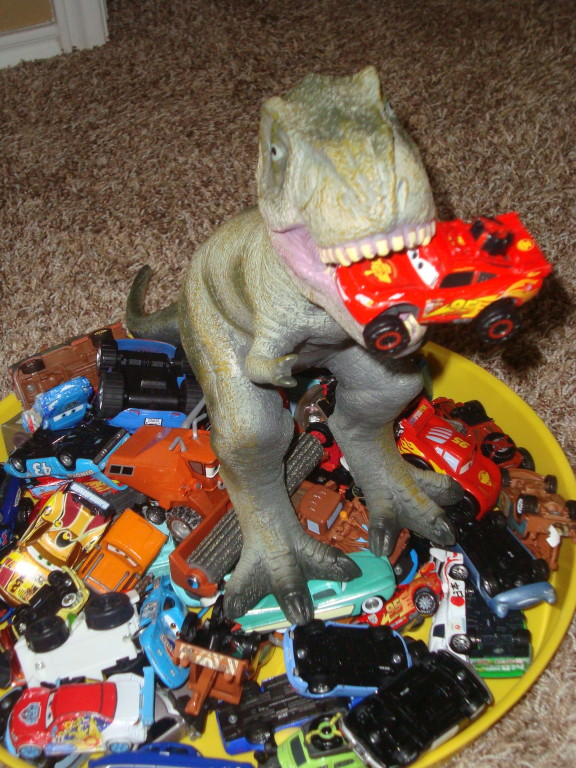