Motherhood comes with a host of choices to make about what is best for you, your family, and your child. We at Alamo City Moms Blog have a variety of moms who want to embrace these choices instead of feeling guilty or judged for them! We are continuing our series, Perspectives in Parenting, with a look at Santa Claus.

Make sure you check out out other perspectives on this topic from Katie A., who loves Santa and the spirit of Christmas he brings, and Katy D., who struggles with the “Santa Conundrum”. 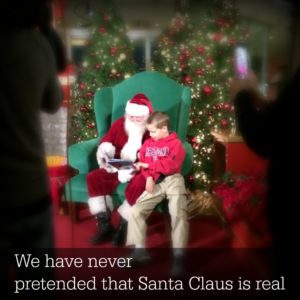 We have never pretended that Santa Claus is real. My kids, ages seven and four, know that the contemporary version of Santa Claus—a magical person who spies on you and may or may not deliver presents—is a myth. If holiday traditions are a buffet, then we choose to skip the consumerism and load up on family togetherness and cultural enrichment. Most of all, I want my kids to trust me to tell them the truth.

Have you ever stopped to really listen to the words of a nursery rhyme and had your assumptions turned upside down? Consider Hush, Little Baby, which begins:

The singer promises all kinds of rewards if the child will Just. Be. Quiet. (Been there?) A folksy version of this song is on my daughter’s favorite CD, and we often play it in the van. (My van is not as cool as Chocolate Thunder, but it’s up there.) Playing the song over and over while driving, I got to thinking: As parents, we want to provide everything for our kids; as we all know, young kids want everything they see. If the singer of “Hush, Little Baby” gave all those things to the child, would that make for a spoiled kid?

Then it occurred to me: Over the long history of this nursery rhyme, the overwhelming majority of the parents singing this song were probably only able to provide their children with a subsistence diet and some improvised toys. This song is not about consumerism; it’s a dream of a cloud-cuckoo-land where food and toys are abundant and where worries about disease or persecution don’t exist. In America today, there are still families struggling with food insecurity. But, unlike most of human history, most children in America now have plenty of food and toys…perhaps too many.

Santa Claus as a magical figure who conjures and bestows toys would have been a ray of hope for children living in minimal conditions. But in our current age of abundance, the Santa story needs rewriting. Happiness is not about receiving gifts or having more things. The Santa Claus story should be about giving. Even the smallest among us has something to give: a handmade card, song, smile, or hug. Children as young as eight years old can volunteer with the San Antonio Food Bank.

My favorite things about the holiday season are the opportunities to slow down and spend time together as a family and to enjoy all the seasonal celebrations and cultural events. Even without taking the Santa Claus myth literally, there is still magic in the holiday season. It’s an opportunity to share the stories from your religious tradition: the nativity, the miracle of lights, or the magic we create with our own hands, and the connections we make with each other. 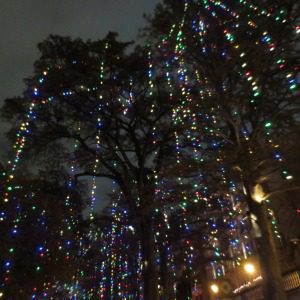 This time of year, the days are short and the nights are long. The darkness gets me down. My solution is to go places with lots of lights to cheer me up, such as the San Antonio Riverwalk. I love holiday music, too, especially The Nutcracker and the San Antonio Symphony’s Holiday Pops. These are all things we can enjoy together without buying into the Santa Claus story.

I can also do without the creepy spying aspect of modern Santa Claus. I want my children to choose good behavior because it’s intrinsically right, not because of vague threats of withholding presents. With all due respect to Taylor and her creative suggestions, I can’t imagine doing Elf on the Shelf at our house. (Although I kind’of like Mensch on a Bench: he’s not spying on your kids, he’s just staying awake to make sure the candles stay lit.)

Being honest about Santa Claus allows for exploration of different traditions in other cultures. Please, please take a few minutes to listen to David Sedaris‘ gut-busting “Six to Eight Black Men,” about St. Nicholas in the Netherlands. You will never think about December 6th the same way again.

Also, once you get away from the consumerist, red-pajama-wearing Santa Claus myth, you can explore the historical St. Nicholas, who was born in the third century A.D., suffered persecution as a Christian in the Roman Empire, became Bishop of Myra (on the Mediterranean coast of what is now Turkey), and was renowned for his generosity and protection of children.

St. Nicholas is popular in Catholic Memes that play on a story from the Council of Nicea, where Bishop Nicholas allegedly punched Arius during a heated argument about the divinity of Jesus Christ. 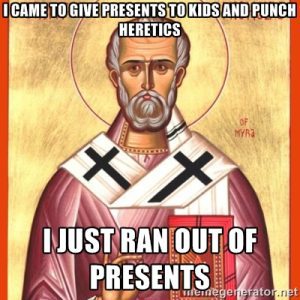 According to Dr. Timothy Milinovich, Assistant Professor of Theology and Pastoral Ministry at Dominican University,

To be fair to the guy, bishops punching bishops/priests at Councils was extremely common. To this day, the Code of Canon Law strictly forbids anyone to “punch” a bishop or “pull his beard.” And, if that directive seems so specific that you think it must be based on things that actually happened, you would be correct. I normally tell students when we start covering the councils, “If at any point these dry theological debates seem unappetizing, just imagine a bunch of bishops punching each other and pulling each others beards while shouting theological slogans.” It helps. 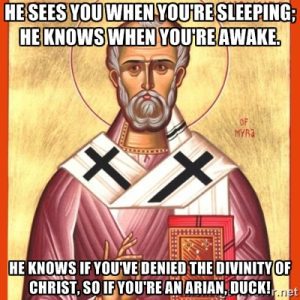 The other day, my kids and I were hanging out backstage with a mall Santa. He was perfect for the job, with a real beard and a gift for putting kids at ease. Most of the year he is a farmer, but during the holidays he goes to the mall and makes kids happy. F.T. asked me if he was the real Santa. I said no, but that we could pretend. I want my kids to know what the traditions are so they can play along. I do not want F.T. to spill the beans to his friends who still believe in Santa. 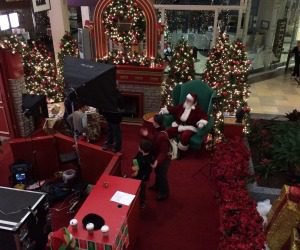 My kids tend to take everything literally. I was the same way when I was little. As a kid, when I got teased I felt like a fool, like I should have known better. It wasn’t until I was in my twenties that I (sort’of) learned the art of conversation and banter. (I’m still a bore at parties; I tend to talk nonstop about my latest blog post.) I can’t always protect my kids from other people who want to tease them or tell them things that aren’t true. But I want them to grow up trusting me to tell them the truth.

Part of my job as a parent is to have tough conversations with my kids. Even from a young age, when I talk to my kids about reproductive and sexual body parts, I use medically-appropriate terms. My goal is to minimize the amount of silliness and embarrassment down the road. (For more tips about The Talk from our sister sites, see “How to Talk to Kids About Sex” from Melissa H. at Houston Moms Blog, and “Talking to Kids About Private Parts” from Vanessa Knight at Kansas City Moms Blog).

As my kids get older, those tough conversations are going to get more specific. Someday, I’ll be telling them things like this:

Don’t have unprotected sex, because you might get germs that cause sexually transmitted diseases, or cause an unplanned pregnancy.

Don’t smoke, because cigarettes are poisonous and addictive.

Don’t take drugs, because they mess with your brain, and you might get addicted or die from an overdose.

During conversations like that, I don’t want my kids to give me squinty-eyed looks and ask, “Is this like that Santa Claus thing?” 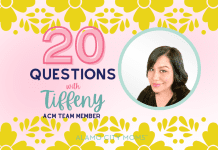 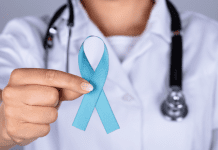 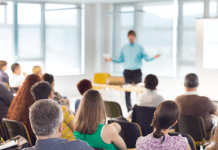 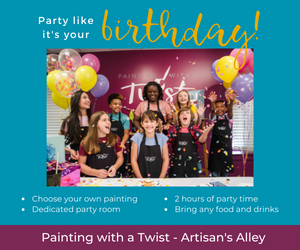