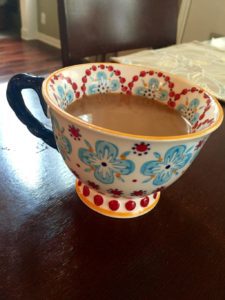 Seven times. SEVEN. That would be the number of times I reheated my coffee yesterday morning. By the afternoon, I ended up pouring out at least the last third of it. I tried to finish it—hard. Seven times in a microwave is bound to give you some sort of poisonous radiation, but I was determined. Usually I’ll reheat it once or twice and then just forget it’s in there until I go to heat up my kids’ hotdogs for lunch. What? Hotdogs are protein. But yesterday, as I poured every last drop of my seven-times reheated coffee down the sink in frustration, I realized I was the only one in the house who cared about this travesty. The two wild monkeys screaming at me for making them put on shoes didn’t care that I prefer hot coffee. They didn’t even care that I had just used/wasted the last bit of creamer in the house. I looked down at my daughter (whose day was already ruined due to the ponytail I made her wear) and said, “One day in the future, I’d like a hot cup of coffee. Just one.” She blinked, looked down at her feet, and said, “I don’t like these shoes. They slip.”

It’s the moments like this that make it glaringly obvious that I’m on the SAHM bus alone during the day. At times, I think we’re a party of three. The Three Musketeers! The Three Amigos! Nope, it’s very obvious that it’s more like Three’s Company and I’m Chrissy. I think I get it, but I really don’t, and everyone is laughing at me. At least, the two monkeys are. They are in control, and the faster I realize that, the better off I’ll be.

Take, for instance, the phone. My kids don’t care that I’m on the phone. They don’t care that I’ve waited for a doctor’s office to return my call for six hours. They don’t care that I have a professional business with clients. In fact, the ringing phone becomes the start of a game they call “I hate anything and everything that might be of interest to you.” My cell phone rings. I see that it’s a client. Immediate let down. Why? Because there is no way on God’s green Earth I will answer that phone. I’ve realized this the hard way. My children have “important phone call radar,” and it’s good. The military should look into what they’re using. A telemarketer? Silence from the peanut gallery. A client or doctor’s office? High alert. Immediate tantrum at my feet whilst trying to pull down my pants. And you all know what I’m talking about.

I’ve tried various techniques. My go-to for a while was the “burst into a sprint towards the nearest closet and shut the door behind me.” Oh, silly me. I forgot about the power of a closed door with a parent behind it. It creates a child rapture. They will burn it down if necessary. Another oldie but goodie method is the “step outside.” Please know prior to trying this method that there are only two outcomes: you will absolutely be locked out OR your child will follow you screaming. Just decide right now that you will never again answer your phone—it’s easier and less disappointing. Plus, real mommy friends know it’s text or bust.

Another thing that has really changed in my life? My love of music in my car. Nope, they don’t care about that either. They also don’t care about my interest in music genres outside the realm of Disney Princess tunes. I was in the car the other day with both monkeys. I felt like a rock star parent when I suggested that we listen to one of their songs (e.g., Ariel’s “Part of Your World”) and then one of mine. That way they would acquire solid music taste (i.e., anything I listen to) and I wouldn’t lose my mind. Win-win.

Last week was no different. We finished with an incredibly strong performance of “Poor Unfortunate Souls” (I’m always forced to be Ursula and I can’t figure out why, although I must say I’m getting really good) and then I began to switch the music to some kind of awesomeness by Meagan Trainor when suddenly…a giant burst of tears from the rear—so much so, I swerved the car out of fear that someone’s head had fallen off. “What’s wrong?!” I screamed. I was genuinely concerned at this point. My daughter, in all her Academy Award glory, bellowed, “I can’t listen to your music one more time. It’s yucky. Please don’t make me. Please just love me.” She’s four, y’all.

I shook my head, ignored her completely, and turned up Megs a little bit louder. After all, I’m the parent, and we always win. Except maybe not.

My daughter was now screaming the lyrics to “Let It Go” in protest of my song choice. I turned it up louder. She sung screamed louder. And now my son was upset because I’d most likely burst his eardrums. Mother of the Year award was mailed directly to my house, and Meagan Trainor got turned off out of sheer guilt for my son’s hearing. “Part of Your World” began to play (also out of guilt). We drove off into the sunset perfecting our roles as pretty princess mermaid and giant octopus witch. Oh, the irony.

And lastly, a story regarding self-care and urination: two things that are apparently unfairly important to me. Ahhh, the classic “I have to pee.” Now, I’m aware that kids don’t like you happy, balanced, full, or energized. I get it. But, when I have to pee, I feel like I should be able to go without becoming angry, naked, and observed like a lab rat.

It was mid-afternoon a few weeks ago and my kids and I were playing “pretend kitchen” upstairs in the playroom. While we were playing, my daughter went back and forth to the restroom, and my son, who’s her little shadow, followed. Cute, I thought to myself. She hurried back, and our playing commenced. We were all upstairs together, and the restroom is maybe 25 feet from where we were sitting. At one point I nonchalantly got up and said, “I’ve gotta potty. I’ll be right back.” Unfortunately, this is the wrong thing to say. Ever. I’m not allowed to urinate as freely as a toddler. This is a right that is taken from you as a parent. The potty radar works the same as phone radar. Mission: Not happening.

So, true to form, my daughter stands up, sighs heavily, and very casually begins walking with me. “What are you doing?” I ask. “Well, I was playing, but I can go with you.” Nope. Not necessary. In fact, don’t. I’ll be right back. She ignores me. The three of us stand up together. Yes, three, because my son is her assistant. “Mama, sit down. Mama, no no potty.” Holiness. “Guys, I’ll be right back. Finish making the pizza and I’ll be back to eat it.” My daughter refuses, and my son begins to cry. Both start to follow me. I pretend not to hear them and continue on my journey to the bathroom.

Halfway there, my daughter accidentally trips over my sons’ truck (which is also coming with us). Obviously, she has gravely injured herself and wails. This makes my son cry. I pick him up, and at this point pee is probably running down my leg. I carry him to the toilet and attempt to put him down while I unbutton my jeans. My daughter yells, “I’m really hurt. Come here!” Feeling guilty (notice a theme?), I head back to her with my pants halfway down and stare down at the non-existent injury. After my very intentional eye roll, I lean to kiss it and yet again, make my way to the bathroom. My son is clinging to me baby monkey-style while continuing to cry. But, I SIT! I FINALLY SIT!

So, my daughter is lying in the hallway, I’m peeing, and my son is now undressing me from the top down. For funsies. He’s learning how to master the button, and it’s a perfect time to practice. I wave my white mommy flag while he goes to town. And for a grand finale, through her pain, my daughter has the energy to yell, “Your tummy looks funny” as she looks at me from the ground. I silently do my business, stand up half-naked, give up on life, and head back to the small table while I wait for my felt pizza to be cooked. 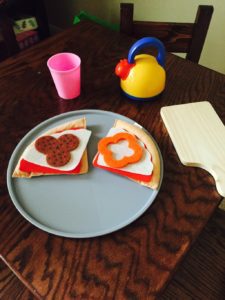 I’ve come to realize that this snapshot could be taken at any point of any day (except while they’re sleeping or watching Bubble Guppies), and it would look similar. Perhaps this is why we moms have a hard time answering when our loving partner walks through the door and innocently asks, “How was your day”? There simply are not any acceptable words to describe being undressed and insulted on the toilet. Obviously, I answer “good” or “fine,” because everyone is still alive and mostly dressed. Mostly. But the truth is, all I want is someone to care about my coffee.