In the summer of 2008, I found out that I was expecting our first child and was elated. From the beginning, my husband Kelly was insistent that we would have twins, though the doctor assured us at our first visit that there was only one sac. However, a few weeks later, we were all surprised to find out that Kelly was right; I was pregnant with twins. However, there were serious complications that would ultimately lead to our boys passing prematurely. I was admitted to the hospital to deliver our twins, Sean and Liam, on October 9, 2008, which was one day before my birthday. And while I did my best to deliver them that day, my body was simply not ready for labor and I delivered them shortly after midnight on my 26th birthday. I only had a few moments to see them before I began to hemorrhage and was rushed into emergency surgery. When I woke up, I lay in bed by myself in my hospital gown trying to reconcile the fact that our boys were no longer inside of me but would also not be coming home with us.

I was sent home a few days later but spiked an extremely high fever and was admitted back to the hospital with sepsis. For the next three weeks, I underwent multiple surgeries and blood transfusions, all from complications of the pregnancy.

After many weeks, I started to run (more of a walk/jog, if I’m honest), and mile by mile, I felt a small sense of restoration. I began to look at my running time as healing, but also as a time that I felt closest to Sean and Liam. I found a counselor who helped me to process my grief and also helped me to accept the fact that my husband’s grief journey would look different than my own.

When we were approaching the 10th anniversary of their passing, I started to feel a pull to do something different. A dear friend of mine had a miscarriage and we connected, as she had been feeling really isolated. As we talked about my journey, I shared how part of my physical healing journey was to start running because I really felt my body had failed me. And then I remembered searching for a run that was for pregnancy and infant loss, but I couldn’t find one. And then the idea came flooding in… what if there were a run where women who had experienced pregnancy or infant loss could come together in community? 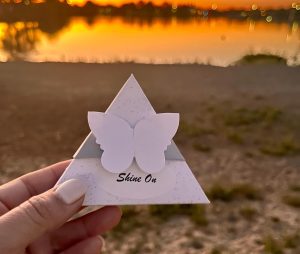 So we started thinking about the name… how would we encompass an event that was meant to celebrate lives that were cut too short? One day, in the mix of all this brainstorming, I picked up a necklace for a friend that she had purchased. This necklace was a dainty angel wing that was a gift for a friend whose brother had passed and I was taken by the name of the company, “Shine Life.” I learned that this company was founded by someone who had experienced both pregnancy and infant loss, as well as the death of her mother. It felt like synchronicity. As I walked out of the shop, I saw the name so clearly… ”Shine On.” I couldn’t verbalize why just yet, but when I got in my car and Pandora was on, a song that I had probably heard before, but not really “heard,” came on… SHINE ON. I wept… like the ugly cry when your face swells and everything is dripping. I think it was a God whisper, but some people would say it was the universe… or even Sean and Liam. 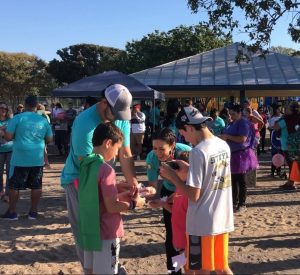 We have held five runs now and each one humbles me. We get to remember angels. Is there any greater honor? Our hope is that this event speaks to the family whose love continues to shine brightly; the mother and father who remain strong for their family; and the life of the baby who left this world too soon, but illuminates brightly from beyond.

As for my birthday, I used to ruminate on the misfortune of Sean and Liam’s passing on the same day. But today, I am thankful that we share this day. They have given me the gifts of empathy, of love, and of deep connection with others who might feel the isolation that I once did. I often marvel at the friendships that I have developed with women over the years, all rooted in loss. And although it still hurts, there is so much beauty in my life that is directly connected to Sean and Liam. Their lights, and all the babies’ lights we honor, shine through the love of those of us who remember them. We remember them. 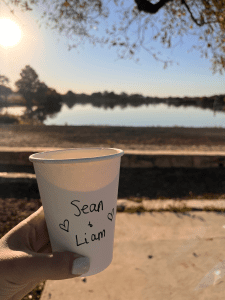 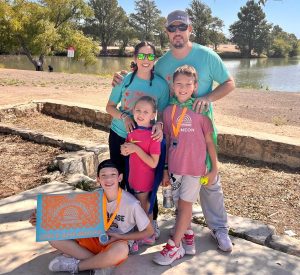 Thank you to local mom Amber for sharing her story and her heart! To learn more about the Shine On Remembrance Run, visit them on either Facebook at @shineonremembrancerun or Instagram @shineonrun.