Ah, the school morning grind. God bless the parents up early to get their children off to a happy, productive day at school. No, seriously—we need God’s blessing. And usually some extra strength. And sometimes forgiveness. Because there is something special that happens between the hours of 7:00 and 8:00 A.M. between parent and child, at least in our home. The magical spell of a darling sleeping child is broken at “good morning, baby girl” and in its place the morning monster awakens, equipped with all of her fiery powers to attempt to ruin my day: flaring arms, attitude that goes on for miles, and specific requests for breakfast that we have never, ever served in her entire life. But then again, who doesn’t prefer chocolate pancakes with freshly made whipped cream and a side of Nilla wafers?

Over the last year of preschool (our morning monster started young), I have decided I need the appropriate weaponry to fight back. I mean, it’s only fair that if she comes to the arena with fiery breath that she often refuses to brush clean, I can have a little something up my sleeve, too. That’s when I first decided to create our hair chart. Of all the battles we have in the morning—getting dressed; having to put on socks, the most difficult clothing item invented; brushing teeth; eating breakfast; etc.—hair was the most destructive to our morning. I pulled too tight; she hates ponytails on Tuesdays (doesn’t everyone?); there are bumps in her braid; she’s going to pull it out as soon as she gets to school… The list goes on. I was done with this fight. DONE.

You’ve got to know your child, of course. I know mine, and I know that control is her thing (a trait she must get from her father). If she has some control (e.g., choice), her world isn’t so bad. So, I created the hair chart that is taped just inside my medicine cabinet door. This beautiful creation provides two hair options for each day. We limit it to weekdays only because on the weekends she gets to pick her own ‘do. So for Monday, she gets to choose between “Anna braids” or “Elsa braid.” Tuesday, she selects either a low pony or a headband. And so forth. Now, of course there are some mornings when Mama is a bit tired and so her hair is simply brushed and stays down, but for the most part, we both follow this chart to a T. She gets excited—yes, really—to check it, and I don’t have to worry about the dreaded conversation battle over hairstyle.

So here is what we did. I sat my daughter down one afternoon (calmly and at a completely separate time from the morning mess) and explained that the mornings were stressful for me and asked if she agreed. I asked her to share her opinion on why it was so stressful and then shared my opinion. After this conversation, I explained the hair chart and why I thought it would help BOTH of us feel better. I also explained the rules of the chart and noted that I would like to create the daily options together, with her choosing the paired options for each day (which is how we arrived at “Anna braids”). She was excited to make those choices. THEN, I explained that these choices would be set and no changes would be made in the mornings. We have adjusted the hair chart a little to include new styles she would like to try, but it’s always a conversation BEFORE the morning. 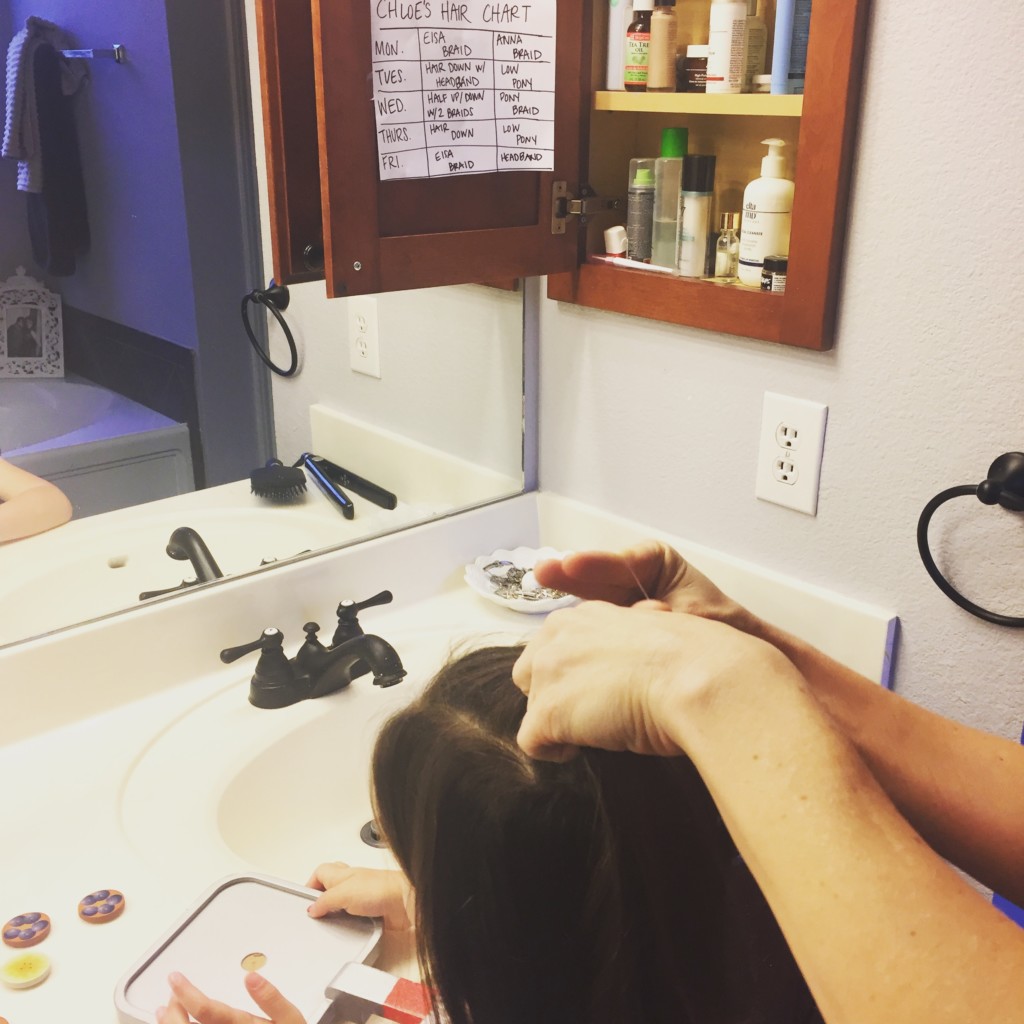 We also do this with the next day’s outfit, to some extent, which is chosen the night before and set downstairs for her to put on while she watches a cartoon. My husband will hold up two different shirts and let her choose one for the next day. Because my child is a bit strong-willed (understatement of the century), this was met with resistance at first. She wanted more than one choice; she disliked both choices; it was Thursday and blue is awful on Thursdays, etc.

The key to all of this succeeding in your house is to embrace moderated choice. Kids desperately need structure and routine, but they also need to feel confident in their ability to make a decision. For us, the choice chart provides the best of both worlds. While it can be used at any age range—perhaps as they get older, you’d like to include three or four choices or allow them to choose a “short-sleeved shirt and shorts”—it can be tailored to your child’s age and needs. However, at the foundation of this is understanding WHY a child benefits from moderated choice. That’s basically a term I have given to define “options with boundaries.” As humans, we don’t always like boundaries, but we always need them—especially tiny humans. However, they open the door for resistance, which is exactly what you might expect from your kiddos with the introduction of a new morning policy.

We parents often have a million things on our to-do lists, so resistance usually throws us back into our old habits, because it’s easier. Plus, change is hard. But it’s worth it to give it some time. The most important thing to do is STICK WITH IT. Be consistent and be prepared to end the conversation once you’ve made up your mind at the choices provided. Kids can smell parental retreat and exhaustion. No editing because they are flailing on the ground. No minor changes to make them a little happier. Once they know you mean business and this is the new routine, they will appreciate the structure—I promise.

You can make a “choice chart” with breakfast items, hairdos, clothes, shoes—you name it. Figure out what your family battles are about and tackle them with a chart. It’s not the only weapon you need, but it’s a good one and incredibly versatile. In fact, my daughter often tries to “chart” our entire family: “Hey Mommy, you should chart our dinner each night and then we can pick and know what we’re having every day!”. Hmmm…no. I’m not interested in being held accountable for a decent home-cooked meal every night. That’s what Chipotle is for (duh). But, I digress. For the rest of you, go out and win the morning with a choice chart. May the odds be ever in your favor.