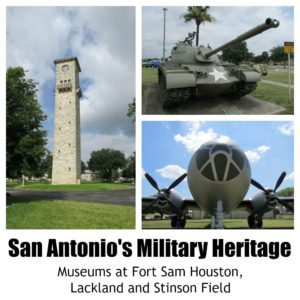 This summer, my kids and I are trying to pack in as much fun and learning as we can. We started out by making a bucket list. One of our goals was to visit more of San Antonio’s military bases and learn how San Antonio earned the name Military City USA. Along the way, we have picked up knowledge about United States history and seen amazing military technology. We have also developed a deeper sense of gratitude for the armed forces who protect our freedom and keep our nation safe from its enemies.

Let’s start with a brief history of military bases in San Antonio. Then, I will recommend a few select sites to visit with your family. Good news: most of them are free. I will also share practical tips for planning your visits, including procedures for how to get on base. (These procedures are accurate as of the publication of this post, but you still might want to call ahead before you visit.)

San Antonio’s military history goes back to 1722, with the creation of the Presidio San Antonio de Bexar, including the Spanish Governor’s Palace. The first United States military base in San Antonio was actually at the Alamo from the 1840s to the 1870s; the U.S. Army made repairs to the sanctuary and gave the Alamo façade its distinctive rounded pediment.

Fort Sam Houston‘s oldest building is the Quadrangle; construction began in 1876. Among the famous people with ties to Fort Sam Houston: Geronimo, the legendary Apache chief, was held prisoner at the Quadrangle; Theodore Roosevelt and the Rough Riders trained there. In 1910, at the dawn of military aviation, Lieutenant Benjamin D. Foulois brought a Wright flyer to Fort Sam Houston and taught himself to fly. Early aircraft were accident-prone, so operations moved to Kelly Field in 1917; the classic movie Wings was filmed there. Brooks Field opened in 1917 for flight training and became a center for the study of aerospace medicine. Randolph Field opened in 1931 with expanded flight training facilities. In 1942, part of Kelly Field was split off to form Lackland Air Force Base, with a focus on basic training.

Now, Joint Base San Antonio (JBSA) combines the administrative functions of Fort Sam Houston, Lackland, and Randolph. Due to Base Realignment and Closure (BRAC), Kelly AFB is now Port San Antonio and Brooks AFB is now Brooks City Base. The military presence in San Antonio continues to have a big impact on economic development. For years, the bases have offered good-paying jobs to help grow San Antonio’s middle class and brought talented, energetic people and new ideas to San Antonio. High-tech activity in the military has spun off clusters of innovation in aviation, medicine, and cybersecurity. 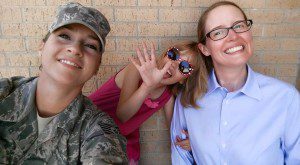 Military life is woven into San Antonio society, and it seems like we all know people who are serving in the military. Alamo City Moms Blog’s own Amy is an Airman, and other contributors are military spouses. Many of us have family members who have served in wars and conflicts; visiting a historic military site with an older relative can be a meaningful opportunity to share stories and collect oral history.

San Antonio’s military heritage is so rich and deep, but let’s focus on three major sites:

At Fort Sam Houston, the Quadrangle is a tranquil space, but you can imagine what it might have been like bustling with soldiers and cavalry. The museum interweaves the history of the base and the city that grew up around it.

I was worried about how to get on base, but everything worked out all right. Fort Sam Houston is located just northeast of downtown San Antonio, as you can see on this Google map. Exit I-35 at Walters and go to the Visitors Control Center (VCC). Present your photo ID, and have proof of insurance handy, just in case. A staff member will look up your ID and ask a few questions (e.g., if you are a CHL holder, don’t bring your firearm). If everything checks out, they will print you a pass with a barcode. Take the pass to the guard at the gate, and keep it on your dashboard. Now you’re on base! To get to the Quadrangle, drive north to the stoplight, turn left (west) on Wilson Way, and turn left (south) on North New Braunfels Road. You’ll see the tall clock tower; enter the Quadrangle from the south, at the Sally Port. 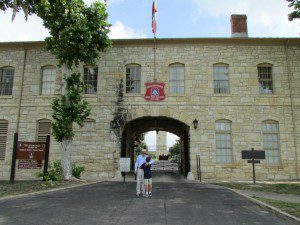 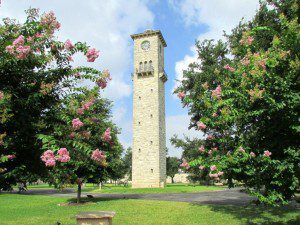 As you might imagine, the Quadrangle is a big square of tidy limestone buildings, anchored by an elegant clock tower in the center. F.T. loved the clock tower and the sundial at the northwest corner. The deer and peacocks are lovely; bring quarters to buy food for them. 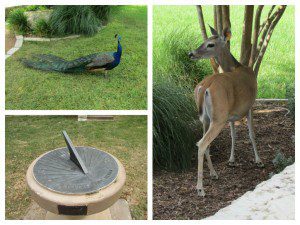 There is a pond and gracious live oak trees. There are historic cannons inside the Quadrangle, and tanks, an armored personnel carrier, artillery, etc., by the parade ground.

The Fort Sam Houston Museum is located along the eastern side of the Quadrangle, with the entrance facing the clock tower. The museum is open Tuesday through Friday from 10:00 A.M. to 4:00 P.M., Saturday from noon to 4:00 P.M., and closed Sunday and Monday. If you want to call ahead, the number is (210) 221-1886. Admission is free. 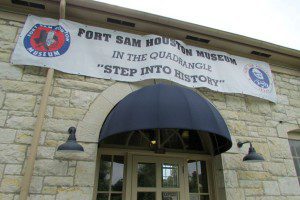 The museum recently got a makeover. The exhibits tell the story of Fort Sam Houston, which is surprisingly interwoven with the history of San Antonio, from the Spanish colonial uniforms down to the award-winning Fiesta hats. The exhibits bring history to life, with uniforms, weapons, drums—even a typewriter and a prosthetic leg—from the Civil War, World War II, and recent conflicts in the Middle East. 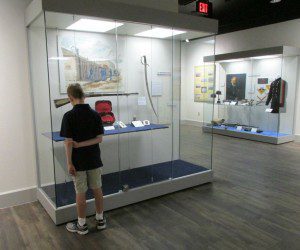 The USAF Airman Heritage Museum at Lackland is an excellent complement. Unlike the Quadrangle, Lackland has a different feeling: it’s very spread out and seems almost like a college campus, with a very fit and motivated group of students. The museum shows what Air Force basic training has been like over the decades and gives you the sense the latest group of recruits are part of an ongoing tradition of excellence.

To get on base at Lackland, you will need a sponsor: either ask a friend for help, or call ahead to the curator of the museum at (210) 671-3055. JBSA-Lackland is on the southwest side of town, as you can see on this Google map. Exit Loop 410 at Valley Hi Drive and turn left (east). Go to the VCC and mention the name of your sponsor to get a pass. While you’re at the VCC, pick up a map to help you find the Parade Ground Airpark and other airparks where historic aircraft are displayed outdoors. Once on base, go straight on Truemper Street, turn left on George Avenue, and look for the museum on your left. 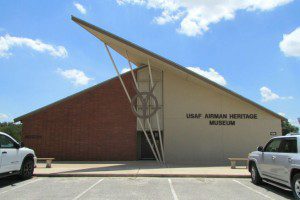 The museum’s hours are Monday through Friday from 8:00 A.M. to 4:30 P.M. The museum is closed Saturday and Sunday. Admission is free.

For decades, Lackland has been the gateway to the Air Force, where decades of new recruits have completed basic training. The museum invites people to bring their photos and other memorabilia to add to the collection. Exhibits showing living quarters and tents demonstrate the changes to basic training over the years.

During World War I, trainees at Kelly Field learned to fly in planes like this one, a Curtiss JN-4 “Jenny.” Compared to a jet engine (the museum has those, too), it looks so simple, but it must have taken a lot of courage to take one up in the air. 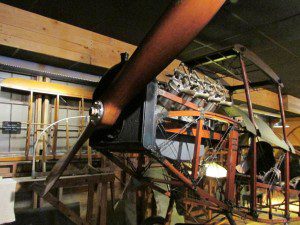 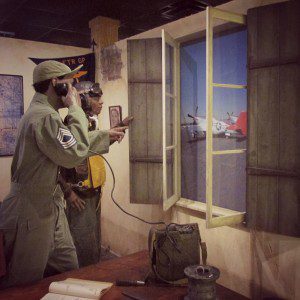 After touring the museum, my daughter and I visited the Parade Ground Airpark, one of several at JBSA-Lackland. G.N. was excited to see the giant bomber planes from World War II, including a B-17 and a B-29. 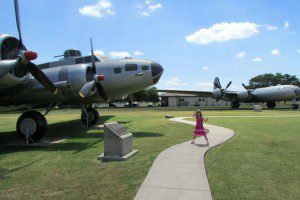 The Texas Air Museum at Stinson Field also celebrates military aviation, but it’s not located on base. Stinson Field, located on the south side of town near the San Antonio Missions, is actually San Antonio’s original municipal airport. Marjorie and Katherine Stinson, along with their brother Eddie, started a flight school there in 1915. The city added a stylish air terminal in the 1930s, and the airport is still in use for general aviation, flight schools, helicopter tours, and more. 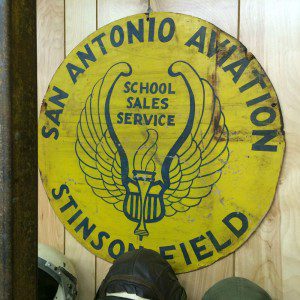 I got lost on the way to the Texas Air Museum, so here are detailed directions. From downtown, go south on Highway 281/37. Exit Loop 410 and turn right (west). Exit Roosevelt Avenue and turn right (north). Turn right on a street called L.C. Amos Jr. When you reach the T intersection with Echo St., turn right. At the end of Echo St., when it T’s into 99th Street, look for a white hangar with the round Texas Air Museum sign. The address is 1234 99th St. 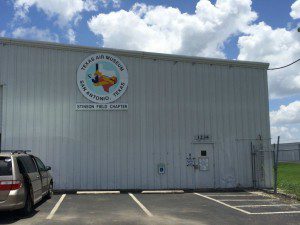 The large hangar is not air conditioned, but it’s packed with historic aircraft. The collection starts with delicate-looking constructions of wood, fabric, and glue and extends to deadly-looking World War II machines and artifacts from astronaut training. 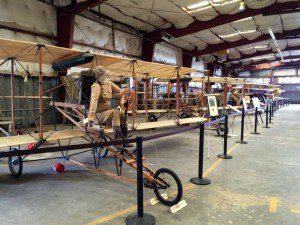 A few smaller rooms within the hangar are climate controlled and show collections of uniforms, helmets, medals, logs, photographs, maps, and more.

My kids’ favorite item was a training cockpit that they could climb inside and push all the buttons, pull all the levers. Question: Would you fly with these two at the controls? Hmm… 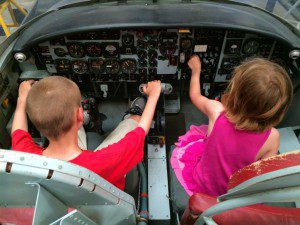 The Texas Air Museum is a volunteer-run labor of love. Some aircraft are still under restoration, and some exhibits could use more interpretive material to help younger visitors learn more about the artifacts. Fortunately, on our visit, we bought Papa, an 80-year-old walking encyclopedia of military history.

Beyond these three military museums, here are some more ideas for your exploration of Military City San Antonio:

Through visiting places connected to San Antonio’s military heritage, my family and I have developed a greater appreciation of the contributions of the armed forces in protecting our nation and developing San Antonio’s unique culture. I hope you feel inspired to visit these sites for yourself soon. 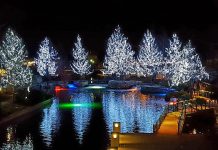 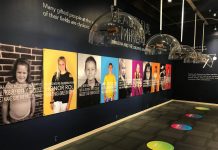 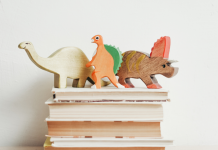 Where to Get Your Dino On