Growing up in San Antonio, I have many fond memories of Schlitterbahn Water Park trips from age 10 through my teenage years. However, as a mom of early elementary and pre-school aged kids, I was skeptical if it would be worth the pricey ticket cost for a special family outing. We decided to try it out with the five and six-year-olds at the very end of last season and were pleasantly surprised with how much there was for them to do. We absolutely had a blast! 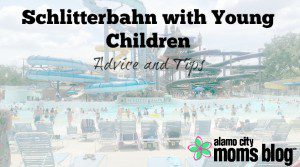 Schlitterbahn only has a height requirement for FOUR rides and we found, in our experience, the attendants don’t actually check the height of each rider.  Addie, our 5-year-old, was just 43″ tall, just 1″ over the 42″ minimum and on all four rides, she wasn’t questioned at all. To help parents decide if smaller children should go on each attraction, they have a recommended attraction rating color system; red being the high-thrill like the Master Blaster and Dragon’s Revenge, in addition to some of the original tube floats like Hillside and Congo. Both kids had bottoms on their tubes along with life vests as well as our one-to-one parent/child ratio, so we were confident with their safety on the rides that are more thrill-based, but you have to treat each child differently. Our two are relatively strong swimmers for their ages and have personalities that are mostly confident trying out new rides. Even if your 5-year-old isn’t up for the Master Blaster, there are tons of other things for them to do. 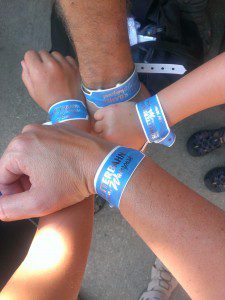 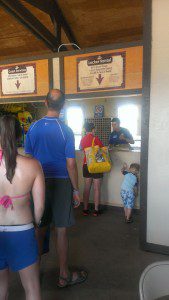 I am a bit of a planner.  I love to maximize time and not be aimlessly wandering around lost or standing in long lines, therefore, we left San Antonio at 9 AM and arrived at the Schlitterbahn Blastenhoff entrance parking lot (588 S. Union St) at 9:40.  We stood in line briefly but were able to walk right into the gates at 10AM, when the park officially opened. (Online, there was an option to buy an early entrance ticket for an hour earlier at 9AM.) While we waited in line in the shade, it was a great time to make sure sunblock was fully applied, cover ups were off and that everyone was ready to roll. The Schlitterbahn employees check ice chests for alcohol and glass only, so pack as many snacks and lunches your can! Once we were inside Blastenhoff, I found a picnic table straight ahead and placed our ice chest and towels on one end, while Blake took an immediate right and got in the line for a locker. As to be expected, the lockers were somewhat expensive at $10 but have a $2 refund when you return the key at the end of the day. Keep in mind, the lockers are the smaller side, around 8″ x 12″ but were very deep and we shoved a pretty large bag with dry clothes, sunblock, shoes, cell phones and keys easily into one. 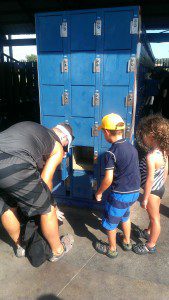 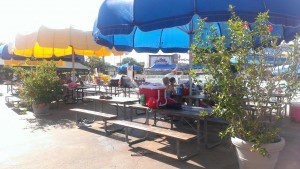 Then all four of us were off to the tall castle tower to the biggest #1 rated water ride for last 10 years  – The Master Blaster. The line at 10:15AM was still 40 min but to hear my kids’ excitement as we rode down together in our double tubes, made it worth while.  However,  much more than 40 minutes and I don’t think I would have stood in line.

We grabbed a snack and the kids rode down some kid-sized body slides at Han’s Hideout before jumping in the New Falls River Ride to take us to the east part of the newer park… Surfenburg! We loved the yellow kiddie tubes with bottoms everywhere.When we arrived at Surfenburg, we rode the Boogie Bahn Surfing Ride and then jumped in line for Surfenburg’s only thrill ride, The Dragon’s Revenge. While Blake waited in the line to get a tube for this ride, I took kids to the bathroom and to play in The Kiddie Coast – the little kid area filled with tons of slides that would be perfect for ages 2.5 to 6 years ideally! Here, there were tons of picnic benches surrounding this area that I might have made home base, especially if I took a 2 or 4-year-old along for the day. 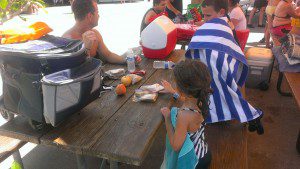 We headed back to Blastenhoff where our ice chest and lunches were around 1PM. After lunch, we played in Blastenhoff Beach, the huge wave pool and torrent river before taking the tram the mile down the road to the original Schlitterbahn West, where we spent two hours doing three of the original style river type floats (waiting in line about 20 minutes for each one). That’s the other part to consider when deciding to take young children, what is their tolerance for lines? Twenty minutes were fine with mine and we used that time to talk about the excitement of the upcoming school year, what they wanted to be for Halloween and just good ol’ fashion family bonding time. The great news was, 90% of the lines were completely shaded, Schlitterbahn has done a spectacular job with vegetation and man-made shade.The only negative for the entire day had to be the thirty-minute wait for the tram to return to the other park, Blastenhoff, where we had parked. This line for the tram is the one place in all of Schlitterbahn that has no shade and we think one of the four trams had broken down leaving an inordinate amount of people waiting. Looking back, since it was close to 1:30 when we came to Schlitterbahn West, we noticed open parking places around the original Schlitterbahn West main entrance lots, so we might have had success jumping in the car and trying to find a nearby place so it would be easier to get to the car the end of the day and not have to mess with the tram line.  (Just a thought.)

Our day, overall, was a huge success and a tremendous amount of family fun. My five-year-old repeatedly keeps saying it was one of the best days of her life and comments like that bring a huge smile to this mommy’s face, especially since I had JUST as much fun! 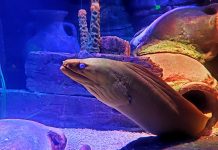 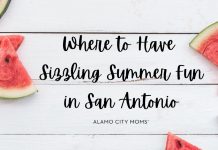 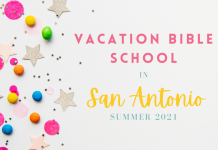 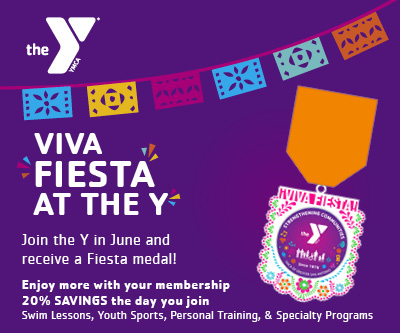