Every December, people in Mexico and around the world get together with family and friends to reenact Mary and Joseph’s journey of looking for a place to stay in Bethlehem. These parties are called Posadas, and they’re a must-do before Christmas in Mexico.

The celebrations start nine days before Christmas to represent a novena (nine days of prayers), and the whole idea of this is pedir posada, which means asking for a place to stay just like Mary and Joseph did since “posada” literally translates as inn or lodge.

To be honest, the term Posada is sometimes used to refer to any Christmas or holiday party, so it can easily be confused with nine days of nonstop parties with great food and drinks. But this fun festivity that has been around for centuries is filled of significance and marvelous details.

When I tried explaining to my young children what a Posada was, they just stared at me in confusion. But when we hosted one, they had a lot of fun, and now they wait for it every year. Here’s my attempt to break down the basics of this tradition by answering a few of the most commonly asked questions about Posadas:

What is a Posada? A traditional Mexican religious celebration that represents Mary and Joseph’s pilgrimage from Nazareth to Bethlehem.

What happens during a Posada? Family, friends, and neighbors get together at someone’s house. Mary and Joseph are represented either by somebody dressing up as them or, more commonly, by figurines, as their journey looking for a place to stay is re-enacted. There are prayers, food, music, fireworks, a piñata, and a lot of fun!

When are Posadas celebrated? They go on for nine days, from December 16th to the 24th.

Do you really have to host nine days of parties? Although a lot of people stick to tradition, in modern days, some people celebrate only a few days of Posadas with different groups of family or friends.

What do you eat during a Posada? Tamales are the all-time favorite food at Posadas, but there’s also pozole, tacos, or any other popular Mexican dish, as well as ponche, a traditional drink made with cane sugar, cinnamon, and fruits; buñuelos, a crunchy fried treat; and champurrado, a chocolate-based warm thick drink.

What other elements make a posada? At a Posada, you’ll usually find all of the following:

How do you ask for Posada? “Pedir posada” is at the center of this celebration. When everybody’s ready for “Pedir posada,” people divide into two groups: the hosts, and the pilgrims. The first group stays inside the house and represents the people from the inn. The second group goes outside with Mary and Joseph and represents the pilgrims. Everybody lights up a candle.

The pilgrims sing a song asking for shelter. The hosts reply with their part of the song, first rejecting them and eventually letting them in. Everybody comes inside, and after some prayers, the party begins.

Hosts: “Aquí no es mesón, sigan adelante, que no puedo abrir, no sea un tunante.” (“This is not a hostel; please keep on going; I shouldn’t open; you may be trouble.”)

The song goes on as Joseph begs for a place to stay for just one night, and he and Mary are rejected until somebody lets them in. When the doors are opened, the tune changes and everybody sings together:

Where can I celebrate a Posada in San Antonio?

For the third year in a row, Pearl will host its annual traditional Posada, where community members are invited to join the celebration and become pilgrims traveling by candlelight. The evening includes live music, Lotería for children, and traditional treats of buñuelos, tamales, and Mexican hot chocolate.

There will be a procession throughout the property guided by Father David Garcia from Mission Concepción and also a performance by Mariachi Mexica.

The event will be presented by the Hispanic Heritage Society of San Antonio. The audience is invited to join a procession around the interior of the Basilica. Following the program, all are invited to the parish hall for la merienda: hot chocolate, buñuelos, and a piñata for the children. On the program again this year is the musical group Voces de San Antonio, joined by Young Voices of the Hispanic Heritage Society. Little Flower Children’s Choir will also sing, and Little Flower School students will portray the roles of Mary, Joseph, the star, and heralds.

This year, open your doors to family and friends and host a Posada. It’s a wonderful way to kick off the holiday season and a perfect excuse to celebrate Christmas with a Mexican twist. 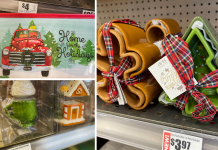 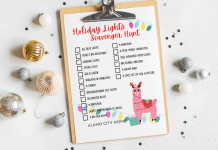 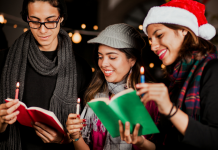