Every now and then then I wistfully reflect on my breastfeeding experience with my two sons, now ages seven and five. Recently, my memories of lullabies and rocking chairs came to a screeching halt when I thought about one breastfeeding issue that most women don’t give much thought to: weaning.

When my seven-year-old was first born, I was so consumed with nursing correctly, pumping, and making it to that six-month or one-year mark, that I didn’t even consider what it would take to wean my child, if I would even have to (the-cross-that-bridge-when-I-get-to-it-approach). Besides, all the popular breastfeeding advice says “a mother and her baby should breastfeed for as long as they wish to breastfeed.”

But what if Mom doesn’t want to anymore?

Usually, I’d heard friends say that they didn’t have to try to wean; their child was just not interested anymore. Once babies start walking, they’re usually too busy to nurse. They were able to successfully follow the “child-led weaning” approach, and that was initially my goal too. One of my favorite breastfeeding websites, KellyMom, explains that child-led weaning “occurs when a child no longer has a need to nurse—nutritionally or emotionally. A baby who self-weans is usually well over a year old, is getting most of his nutrition from solids, is drinking well from a cup, and cuts down on nursing gradually.”

Fast forward… My son was ten months old and still nursing when I found out I was pregnant with my second son. While I thought that this would be the perfect and most natural time to wean him, it didn’t happen. (Cue the google searches for “breastfeeding while pregnant.”) In most cases, nursing during pregnancy is completely safe, and we were able to continue nursing throughout my entire pregnancy. Once my youngest was born and my oldest was one-and-a-half), I bought what seemed like the only book on breastfeeding two kids at once: Adventures in Tandem Nursing. (Alamo City Mom’s very own Denise also wrote an amazing post on Extended Breastfeeding!)

Ay, ay, ay. The book was a wealth of information, but the pictures made me cringe. Would I really look like one of these women in the book? They looked like they were feeding a litter of children! But lo and behold, I turned into a tandem nursing mama. After about a year of that circus, I was done. I remember feeling frustrated. I felt like my body wasn’t even mine anymore. I was “touched out.” Sometimes I was able to juggle nursing them separately, but sometimes I couldn’t. The sensation made my skin crawl. I started experiencing “breastfeeding agitation.” That’s when I realized I no longer wished to breastfeed two children. I had to wean my oldest, but how could I do it without hurting our relationship? Would he feel slighted?

Again, KellyMom advises, “If you feel that you need to encourage weaning before your baby is truly ready, it is possible to gently and lovingly ‘help’ your child along the way, while at the same time remaining as flexible and as respectful to his needs as possible. Some children, even though they’re not truly ready, can be gently weaned without too much of a protest. It’s important to always conduct mother-led weaning in a way that is gentle, gradual, flexible, patient, and as respectful to your child’s needs as possible. Be aware of any signs that the weaning process is going too quickly for your child and be ready to slow things down some if necessary.”

My oldest was at the age when he loved numbers and counting. Timers and countdowns worked for us. I would give him a heads up: “We were going to be all done in one minute!” When we got down to the last 10 seconds, we did a New Year’s Eve-style countdown and cheered at the end. This continued to work as I shortened each nursing session over the course of a month or two. He was weaned without much fanfare.

My youngest was about two when I decided to end our nursing relationship. I was a human pacifier, and it was negatively impacting his and my sleep. I felt guilty, but I resorted to the tried and true pacifier. I would allow him to nurse, but after a time limit I would offer him the pacifier. Again, the sessions got shorter and shorter, until they eventually faded away.

I wonder if I did it right. Maybe I should have waited. But then I think, maybe it was just one of those times they needed a gentle push from Mom to do something they didn’t think they were ready to do. Sometimes isn’t that what being a mom is about? 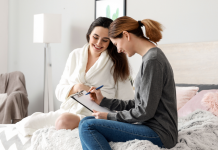 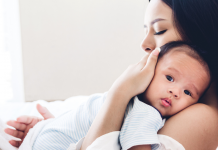 Help! My Baby Has a Tongue Tie 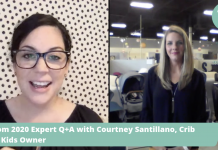 Expert Q+A: Must Have Baby Gear with Courtney Santillano of Crib and Kids