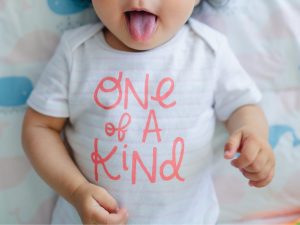 As soon as he was born, my son seemed to absolutely love sticking out his tongue. He did it while he was sleeping, when he was awake and hungry, during tummy time… anytime he felt like it, and it was absolutely adorable.

We stayed in the hospital for five days, so by the time we got home and went to our pediatrician’s office, it was already time for his one-week visit. She noted that he had a tongue and lip tie, but said that they were overdiagnosed. I didn’t question her at all when she said that the ties weren’t affecting him, because she reassured us that he had surpassed his (albeit little) birth weight and was able to stick out his tongue pretty far. “OK,” I thought, “that’s good news. It’s only been a week; maybe the pain of nursing will stop when I start to ‘toughen up.’”

Well, it didn’t get better. The pain remained, and anyone familiar with cluster feeding a newborn knows that you never really get a chance to recover between feedings. One night, my husband passed our son to me so I could feed him. I had tears in my eyes and my chest felt shredded. “You’re doing amazingly. But you look so desperately miserable and defeated,” he said—and I felt it. I was recovering from abdominal surgery while learning how to be a mom, and Covid meant that my family was trapped in the UK and unable to come over and help.

The weeks passed and my son was plagued by issues: severe reflux that wasn’t helped by medication, unending spit up, inconsolable crying, and low weight gain. At his two-month visit, our pediatrician recommended we see a gastroenterologist for help. We were barely in the door when he diagnosed my son with failure to thrive and suggested supplementing every feed with a hypoallergenic formula and a liquid fat supplement designed to help little babies pack on the pounds. We also had to go for a barium swallow study to rule out any structural issues. The study was an unmitigated disaster, and so was trying to get him to take a bottle after a feeding. I tried seven different bottles, but he simply couldn’t seem to latch on or swallow, then he’d gag and scream until both of us dissolved into tears and I resolved to try again in a few hours.

I felt desperate and torn in half—on one hand, I was giving it my all and following my maternal instincts while being told I needed to do much more than I was doing to help my son gain weight and grow. On the other hand, I had eyes and could see my baby. He looked healthy and strong, and he genuinely seemed to be thriving with me nursing him.

My postpartum doula, by now my friend, kindly offered to arrange a home visit with a lactation consultant from The MILC Group to see if they might be able to help.

IBCLC To the Rescue

When Tina, our IBCLC, arrived for a home visit, I felt a wave of calm wash over me as she told me what I knew in my heart: my baby was healthy, amply hydrated, his skin tone beautiful, his body well-covered, strong and not skinny. When she watched him nurse she said he was trying really hard, but that his suck was incredibly disorganized and as a result, he was wasting time and energy gnawing.

When she asked me about pain, I finally admitted just how much pain I’d been feeling (and accepting as normal!) eight+ times per day. She reassured me that it wasn’t supposed to be that way. I mentioned the cursory dismissal of a tongue tie that had happened over three months before, but her oral exam confirmed that he was tongue-tied, and it definitely wasn’t minor. She gave us gloves and we were able to feel just how tight and restrictive the little band of the frenulum (called the ankyloglossia) actually was.

Tina immediately gave us the contact information for two local pediatric dentists who could confirm her findings and release the ties if necessary, and the number of a speech therapist who would help retrain his oral-motor function after the procedure. We sought two opinions and both confirmed he had a moderately restrictive posterior tongue tie, which was preventing him from transferring milk well. He also had a lip tie which made it really difficult for him to flange his lip, and both of these things together might be contributing to his reflux symptoms.

His tongue and lip ties were released in a laser frenectomy procedure a week or so before he turned four months old. It wasn’t a case of “night and day” difference for us, but over time—thanks to the right support—nursing became more comfortable, he became more efficient at feeding, and his weight started to pick up. After falling off the bottom of the growth chart, every ounce and inch gained now feels so incredibly precious.

Tongue ties affect many babies, and they aren’t new. One of the obstacles to being taken seriously, and that contributes to the ongoing misconception among some doctors that ties aren’t especially serious, is that the number of babies who are being diagnosed and treated for tongue ties is much larger than ever before. But tongue ties aren’t new. They have been noted and treated for generations, and the manual scissors used by some practitioners to release ties were first designed in the late sixteenth century and have been altered very little since. Laser procedures are more popular in the U.S. because they cauterize the wound as they go, but in other places (including the UK, where I’m from) scissors remain the preferred method for dealing with ties.

Though I’m not a medical doctor, I wanted to share my experience with my son’s tongue tie (and all my research before, during, and after its revision) because if I’d been scrolling social media and come across this article during a long and painful night feed, I might have had more conviction in asserting that something was wrong. Here are a few signs to keep your eyes (and ears) open to, and some interesting things I found out:

While I wish my son hadn’t been tongue-tied, and that we’d found it earlier, I couldn’t be prouder to have overcome it and be where we are now. Our experience confirmed to me just how important it is to advocate for your baby and your feeding choices, and to trust your maternal instincts. If you’re looking for a unique and helpful gift for an expecting or new mom friend who wants to breastfeed, consider an at-home consult with a lactation consultant. Even if everything is perfect, confidence and support are the gifts that every new mom wants. And if cookies arrive on the same day? Well, you’ve pretty much just secured your place on the world friendship leaderboard. 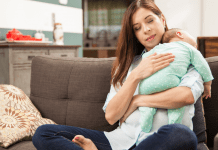 The Best Reason Not to Shower 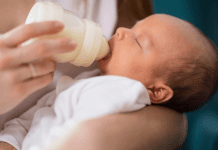 We Need to Talk About IGT and Breastfeeding 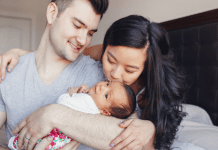 Could COVID Save the Fourth Trimester?